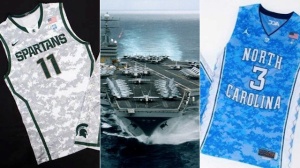 This past week ushered in the start of the college basketball season, and a welcome start it is indeed. But before I had the opportunity to watch my team, the Syracuse Orange, handily defeat Fordham in their season opener on Saturday, my attention was directed towards the North Carolina Tarheels and the Michigan State Spartans, two teams that began their season in a slightly more ostentatious fashion.

I am referring, of course, to the regular-season college basketball game played atop a still-in-service aircraft carrier off the coast of California, in honor of Veteran’s Day.

I met this news with an unlikely combination of “I cannot believe this is happening” and “of course this is something that would be happing.” After the game, I spent the weekend casually inquiring to people I know about what they thought of the whole affair, with responses ranging from “it was awesome, I hope they do it every year” to “fascist debacle.” Something for everyone!

My inclination to be weirded-out by the matter was tempered slightly by the realization that this certainly must be an exciting event for the people who actually serve on this ship; out to see for months at a time, as well the more general idea that there are undoubtedly many veteran’s and nonveterans alike who found the whole operation to be a fitting way to honor those who have served. I have no interest or reason to want to rain on that parade.

Nonetheless the whole thing was a bit strange and more than a bit problematic. The issue isn’t to question why anyone would find such an event appealing, the fact that such an event is so widely appealing is the whole point. The trouble lies in a cultural discourse that continuously creates/reinforces consent for a militarized approach to the world.

That people find this a suitable way to honor veterans on Veteran’s Day is fine, and the idea that many find this cool and exciting is also totally understandable. I am sure I would have had a blast if I were in attendance. It was in many ways a unique and exciting event. (Speaking of it being a unique event, the commentators mentioned numerous times that players had said how they had not played a basketball game outside in years, highlighting another trend in the culture of athletics that, while fascinating, is as academics like to say, ‘beyond the scope of this work.’) But at the same time we should be clear that we are conflating two distinct things: the idea that we should honor those who served and the idea that armed combat is fun and exciting. Of course, this is nothing new, nor is the intimate connection between sports and nationalism. For example, what would have become of our troubled nation if George W Bush hadn’t thrown a perfect strike in the opening pitch of the 2001 World Series? Fortunately we don’t have to know the answer.

But the event more than made up for any concern that its message wasn’t new with how in-your-face it was. The players from each team wore camo-themed jerseys with the letters USA in place of their names. The President and First Lady were there. The event was sponsored by, among others, Quicken Loans, the Navy Federal Credit Union, Miller High Life, Coca Cola Zero, and Applebees. (Again, something for everyone!) The aircraft carrier itself, the USS Carl Vinson, was (and this is impossible to make up), the ship from which the operation that killed Osama bin Laden was launched and the vessel from which his body was buried at sea. The event can be characterized by many things, but subtle understatement is not one of them.

The whole situation, and the coverage surrounding it, relentlessly hammered home the idea that not only is the military awesome, but that there is no conceivable alternative position. Prior to the game, Michigan State head coach Tom Izzo commented  regarding the aforementioned camo-themed jerseys that “[w]hen I spent some time coaching the troops in Kuwait a few years ago, I was fortunate enough to get to wear fatigues twice. That was certainly a thrill for me, and if a player doesn’t get a little more excited wearing this, there’s something wrong.” But coach, the splotchy pattern is just terribly unflattering for my figure. Can’t I just wear a flag-shaped lapel pin?

Similarly, ESPN’s Dana O’Neil literally began her post-game interview with UNC coach Roy Williams by asking if the whole event was what he expected or more than what he expected. Chill with the tough questions Dana, the poor guy had to travel through three time zones to get here.

Again, the point isn’t to be crank about the whole thing and tell people they can’t enjoy themselves a silly basketball game on a military vessel. There are worse ways to spend a Friday evening. And this combination of sports, nationalism, and look-how-cool-this-military-stuff-is can be found all over the place, including my neck of the college sporting world.  The issue is the cumulative cultural implications of events like this. For example, I think it has become acceptable to make the argument that the major media organizations in the United States were quick to assume the role of cheerleaders prior to the Iraq war, and only got around to asking changing questions a few years on, well after things had decidedly not gone according to plan. Events like the Carrier Classic do much to lay the foundation for that this sort of thing.

Though there are plenty of people who write on this, Andrew Bacevich’s book The New American Militarism  offers both a convincing and authoritative take on the cultural foundations of the United States’ militarized approach to pursuing its interests in the world.  Bacevich describes The New American militarism as a reaction to anti-war movement during the Vietnam era and as being characterized by not only a deference to soldiers and military institutions, but an enchantment with the modern aesthetics of war; a captivation with smart bombs and predator drones, with a way of fighting that more resembles the experience of playing a first-person shooter video game than the more messy affair captured in old war movies. One effect of this new aesthetic (in addition to the all-volunteer nature of the US military), is that people can be captivated by war without being truly affected by it. We are doing our duty of honoring the troops by watching this basketball game, a point driven home by how out of place President Obama’s mention of ‘oh yeah and we are trying to see if maybe we can actually get these guys jobs when they come home’ in his pre-game speech seemed from the otherwise unequivocally celebratory atmosphere.

The tension between honoring the service of veterans and celebrating war is inherent in the holiday itself. It makes sense that we might rename Armistice Day, the internationally recognized holiday commemorating the end of the First World War, to Veteran’s Day as a way to honor soldiers of all wars. But there is nonetheless a qualitative difference between celebrating the end of war to honoring those who fought in wars, and the distance from the latter to a straightforward celebration of war is much shorter.