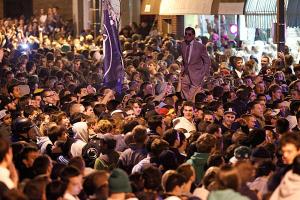 Until yesterday morning I had met each new development in the Penn State saga with resigned sadness. I have never been to State College, PA but have friends and roommates that graduated from Penn State and/or are from that part of Pennsylvania so I have some sense, albeit indirect, of the importance of why the university’s football program and Joe Paterno in particular are so important to the people associated with it.

It is of course absolutely heartbreaking to hear about the sexual abuse of innocent children and that this abuse took place years ago and has remained hidden by university officials who ostensibly valued brand management over justice. Indeed, that the whole matter was unfolding in the already strange discourse of college athletics, a discourse best characterized by hyperbole and a misplaced sense of importance. David Roth summed up this situation perfectly in his scathing piece on the matter in which he noted that “[t]he college football discourse was never designed to handle something this serious, and is as unprepared for it as the business discourse was for its switch from facile boosterism and clammy wealth-humping to post-crash forensics.”

Nonetheless, it did seem sad to see that Joe Paterno’s career, a career marked by both impressive and unusual longevity and an even more unusual “grand experiment” that strived for both academic and athletic excellence, would likely end on a note of humiliation and scandal. One can even try to empathize with why Paterno would (however foolish and short-sighted such thinking might be) want to keep quiet on the matter out of concern over bringing ill repute for his program. And it is certainly easier to pontificate about what he should have done for people entirely removed from the situation. But of course, any basic understanding of morality entails doing what is right even and especially if doing so is difficult, so that he was so unceremoniously fired seems entirely fitting given the nature of what happened. But at the same time it only made an already terrible situation that much more unfortunate.

But it was the events that followed Peterno’s dismissal that quite literally gave me pause. I went to bed shortly after hearing that the Penn State Board of Trustees had fired, effective immediately, both their storied football coach and the university president, and the first news I saw the next morning was that of the student riots that ensued.

For whatever reason, perhaps naiveté, perhaps ignorance, I never expected that result, and had no idea what to make of it at first. It seemed so strange, both in the context of the gravity of this specific situation but also the political context more generally. I could only imagine how an Occupy Wall Street organizer might react upon seeing thousands of college students rioting in the streets over the terminated employment of an elderly football coach. I imagined said organizer’s head exploding. Of all the things to make people take to the streets, with so many causes in need of support, people are rioting over this?

I really had to sit and think about it for a while. I wanted to move beyond facile explanations like the problems of college culture or the political apathy of the current generation of students. Instead of just dismissing the actions of Penn State students as misguided and unnecessarily destructive, though there are certainly both these things, I wanted to try to understand why they had come to be this way.

In the end, while the actions of the Penn State rioters are destructive, inappropriate, and misplaced, I think this shows that people badly want institutions – and leaders – in which they can believe. That for so many such an institution was a college football program and its long-tenured coach might be attributed to misguided and perplexing priorities, but certainly the failure of other institutions including and especially the system of representative government in this country plays an important role in this as well.

In this regard, the Penn State riots and the Occupy Wall Street protests are two sides of the same coin. While many see the Occupy movements around the country and throughout the world as a way to demonstrate and draw attention to issues of economic inequality and elite dominance of public policy, many others, especially those who have been permanently encamped at the protests and participating in the general assembly meetings intend to establish not just a movement but a venue thorough which they might achieve meaningful participation. They are both rallying against corrupt institutions as well as establishing their own.

I imagine the next several weeks will see a great deal of soul searching in State College, PA, as administrators and students alike come to terms with the aftermath of riots, a still unfolding and tragic sexual abuse and rape scandal, and the end of an era for a football program. Hopefully with this reflection comes both insight on how these events came to unfold as they did as well as a sense of determination to direct such clear desire to be part of something meaningful towards actually achieving it.